What happened to the church?

Amid heightened concerns about the fate of historic cultural heritage sites in Karabakh comes news that Azerbaijan has razed a three-year-old Armenian church. Our weekly Post-War Report. 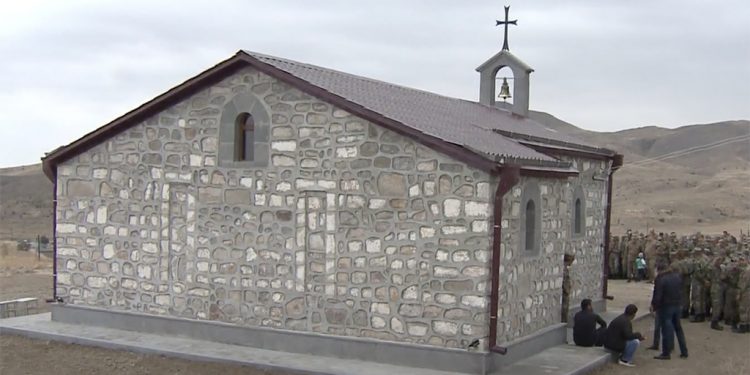 The church being consecrated in 2017 (screenshot)

The sensitive politics of Karabakh’s cultural heritage blew up this week following the disclosure that Azerbaijan has already completely leveled an Armenian church in the territory it took back in last year’s war.

In a report aired March 26, a BBC crew tracked down the spot where an Armenian church had once stood in the town of Jebrayil. They had seen social media video of Azerbaijani soldiers celebrating on top of the church after capturing the town and were following up.

In a remarkable feat of on-the-spot geolocation, while they were on a government-guided press trip, they managed to find the site. The church had been leveled so thoroughly that nothing remained.

A local soldier, queried by the BBC, claimed improbably that Armenians themselves had destroyed it during the war. Later, the reporter presented Hikmet Hajiyev, President Ilham Aliyev’s foreign policy adviser and now the government point man for the international press, with the video evidence. Hajiyev, clearly unprepared, said he would need to verify and quickly pivoted to whataboutism, pointing to the vast destruction that Armenians wrought to the territory that they took in the first war between the two sides in the 1990s.

Since Azerbaijan won the war, the country has seen a resurgence of a pseudoscientific theory that what appear to be centuries-old Armenian churches in the region are in fact the legacy of another group of people, the Caucasian Albanians (no relation to today’s Balkan Albanians). According to this theory, which is not accepted anywhere outside Azerbaijan, Armenians later “Armenified” the churches, making it appear that their presence in the region is much older than it really is.

On March 15 Aliyev visited one 12th-century Armenian church, in the village of Hunarli (which Armenians call Tsakuri), near Hadrut in Nagorno-Karabakh. While TV cameras were rolling, he pointed at the Armenian inscriptions on the wall of the church. “All these inscriptions are fake – they were written later. They have created a false history for themselves in our ancient lands,” he claimed. “The Armenians wanted to Armenianize this church and wrote inscriptions in Armenian here, but they failed.” The Azerbaijani Ministry of Culture has also claimed that the Dadivank Monastery, one of the jewels of medieval Armenian architecture, is Albanian as well.

How this attitude will inform Azerbaijan’s stewardship of the Armenian sites now under their control remains to be seen.

The situation that the BBC uncovered was murkier: the church, Zoravor Holy Mother of God, was a small, boxy modern structure built only in late 2017, at a military base in an area that had virtually no civilian population following the war in the 1990s (and where nearly no Armenians had lived for a century before that). Its presence amounted to a religiously tinged flag-planting in occupied territory.

It was a military church built on ethnically cleansed land.

The equivalent is Azerbaijan taking over Goris, driving the population out, razing all the buildings and constructing a tiny mosque for the army stationed there.

Outrage over this just dilutes the warranted outrage.

Hajiyev, once the controversy broke, appeared to remember what church was under question. He recalled that he had, when it was initially built, condemned its construction as “an attempt to give a religious color to the conflict.” He did not address the question of the church’s apparent elimination.

In 2017 as MFA Spokesperson I made statement on illegal construction of military chapel in occupied Jabrayil where never Armenians lived. I said: Building chapel while vandalizing everything rlt w/ Azerbaijan is contrary to basic principles of Christianityhttps://t.co/8HDjcLtpDJ

Azerbaijan’s PR machine quickly kicked into the only mode it knows: guns blazing. A piece published by the Trend News Agency accused the BBC of a “lie” in “presenting a military object as a church” and claiming that the report was “prepared on special orders from Armenians.”

Even if this 2017 church isn’t really cultural heritage in the way that, say, Dadivank is, it’s not clear that this a distinction that the Azerbaijanis are going to respect.

In 2005 and 2006, Azerbaijanis razed a historic medieval cemetery in Nakhchivan and continue to deny that they did it. During last year’s war, a 19th-century Armenian cathedral in Shusha was shelled twice in quick succession; Human Rights Watch said it appeared to be deliberate. Another church of the same vintage in Shusha also appears to have been significantly damaged, though it’s not clear whether the damage happened during or after the fighting.

It is a situation that calls out for a third party to mediate and monitor, but so far that is not happening.

Hajiyev, on March 17, announced that he had been talking to officials at UNESCO about arranging a mission to the region, and that Aliyev also had spoken with UNESCO’s director-general. Hajiyev highlighted Baku’s “readiness to accept the organization’s mission to assess the damage caused to cultural and religious monuments in the liberated territories of Azerbaijan. He [Hajiyev] mentioned crimes committed by Armenia against the cultural and religious heritage of the Azerbaijani people in the territories during almost 30 years of occupation,” local media reported. The report did not mention the fate of Armenian sites.

UNESCO has not publicly responded, and did not respond to a request for comment from Eurasianet.

In December, though, the organization issued a strongly worded statement saying that their efforts to send a mission to the region had been stymied by Baku. “The authorities of Azerbaijan have been approached several times without success so far. Every passing week makes the assessment of the situation concerning cultural property more difficult,” said UNESCO’s assistant director-general for culture, Ernesto Ottone. “We are therefore expecting Baku to respond without delay so that the constructive discussions held over recent weeks can be turned into action.”

Azerbaijani officials then claimed that weather and land mines prevented them from welcoming the UNESCO mission. That hasn’t prevented Baku from organizing several controlled trips around the region for diplomats and journalists – like the one that the BBC reporters took.

Those visits have invariably illustrated the vast level of destruction that Azerbaijani cultural and religious sites suffered under close to three decades of Armenian occupation. So it would seem that it is in Baku’s interest to only expand access to the region.

#KarabakhCulturalGenocide 17 Why destroy the grave of a poetesse? The most important poetess of all time of Azerbaijan, Khurshid Banu Natavan's grave in Agdam was sacked and destroyed by Armenian forces. I saw her statue standing in 1992 and then the destruction in 2020 pic.twitter.com/IXYLvmjmbB

(The Azerbaijani authorities, incidentally, have declined multiple requests by this reporter to visit.)

In another segment of the BBC report, the crew went along with an Azerbaijani family back to their hometown in the newly retaken territories; the family found that their relatives’ graves had been desecrated.

The BBC reporter confronted Armenian Foreign Minister Ara Ayvazyan about the destruction he saw, and the way the diplomat acknowledged his side’s culpability was both surprising, and true: “The same happens now in the territories that fell under control of Azerbaijan.”

Joshua Kucera is the Turkey/Caucasus editor at Eurasianet