"Further direct conflict occurred around the village of Farrukh and the mountain of the same name, on which the Armenian illegal armed groups began to build fortifications." 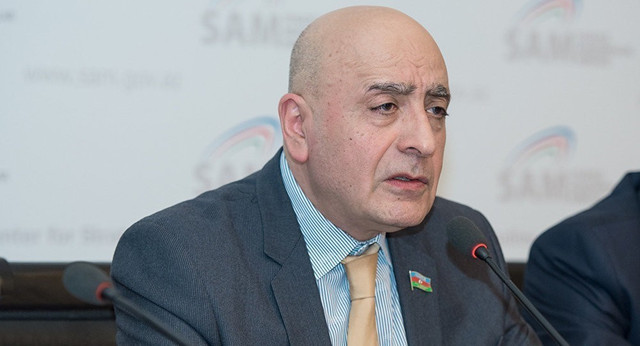 Interview with Azerbaijani political analyst Rasim Musabekov, a member of the Milli Majlis.

Perhaps a trite but important question that I would like to hear you answer. What were the plans of the Russian peacekeeping forces when they arrived in Karabakh a little more than a year ago?

The aggravation in Karabakh stems from many factors, some of which are local and others of regional and even global nature. It is obvious that Moscow’s plans for Karabakh after the deployment of its military contingent for the peacekeeping mission here were long-term, going beyond the five years stipulated by the trilateral statement of November 10, 2020. Russian media and analysts described it as Moscow’s undeniable success and confidently predicted further development of the Russian peacekeeping mission into a full-fledged, long-term military base. Certain actions confirmed these intentions. The composition of the Russian peacekeeping forces and attached auxiliary units far exceeded the 1,960 personnel stipulated in the trilateral statement. In addition to the prefabricated stations and barracks in the town of Khojaly and at the airport of the same name, permanent facilities were rapidly built. The command of the peacekeeping forces, contrary to Paragraph 4 of the trilateral statement, was in no hurry to enforce the withdrawal of the remaining Armenian military units and to disarm the so-called “local militia”.

What is the reason for the reluctance to disarm these illegal armed groups?

The reason is obvious. First, it was a bargaining position in order to coax Baku into agreeing if not to an indefinite, then at least to a 5-10-year extension of the Russian troops’ deployment. Second, the Russian military command saw the Armenian forces as its own “proxies” in case of possible complications in the region of their deployment. In essence, the Russian peacekeeping forces began to act not as a neutral peacekeeping mission, but as protectors (i.e., patrons, defenders) of the Karabakh Armenians and as an ally of Yerevan. Understandably, this was bound to cause friction and disagreements with Baku and the Azerbaijani armed forces and administration stationed along the perimeter of the territory where the peacekeeping forces are deployed.

What is the nature of the recent incidents?

The two recent incidents have inflamed the situation and led to a harsh exchange of statements by the Russian and Azerbaijani Defense and Foreign Ministries. Citing the negative reaction of the local Armenians and contrary to their own commitments, the Russian military refused to escort the Azerbaijani convoy through Aghdara (formerly Mardakert) District in the direction of Kalbajar.

Consequently, Baku decided to build a new road along the northern bank of the Sarsang reservoir, which in turn triggered a nervous reaction from the Armenians. Further direct conflict occurred around the village of Farrukh and the mountain of the same name, on which the Armenian illegal armed groups began to build fortifications. All the warnings about the inadmissibility of these actions, communicated both through the Russian peacekeepers and through loudspeakers, were ignored. Moreover, shots were fired at Azerbaijani positions from the unfinished fortifications. Given that Mount Farrukh positionally dominates the city of Agdam, which is being rebuilt and where civilians are to return soon, a decision was made and implemented to neutralize this threat in advance. No matter what “menacing” statements foreign Armenian lobbyists may make, Azerbaijan has the right to ensure security in its territory and will not tolerate arbitrary actions of illegal Armenian armed groups.

Opinions have been voiced that Baku’s tough and fair position can cause the Kremlin’s aggression both in the form of some kind of “hybrid” confrontation and in the form of a direct military threat. Is this possible?

If this gives someone in Moscow the idea to “punish” Azerbaijan and to escalate the conflict situation in order to use it as a pretext to strike at our strategic pipeline infrastructure, it will be a bad idea. It is known that Kazakh oil exports from Novorossiysk were halted on a far-fetched pretext, an alleged accident at the loading terminals. If some hotheads believe that by creating difficulties for Azerbaijani oil and gas exports, it is possible to make Western countries lift or soften the embargo on the purchase of Russian energy resources, they are sorely mistaken. I believe that Baku, Tbilisi and Ankara will take measures to enhance the security of the pipeline infrastructure in advance. Given the confrontation with NATO over the invasion of Ukraine, clear-headed Russian politicians and military would do well to remember Talleyrand’s wise saying that “good diplomacy should not multiply enemies”. After all, if Moscow makes a threatening move, neither Azerbaijan nor Turkey will remain neutral.

What do you think of the statement of the Republican Council of the Russian Community of Azerbaijan on supporting Russia’s actions in Ukraine and the position expressed by Mikhail Zabelin in this regard?

As for the statement by the Russian Community of Azerbaijan expressing support for the invasion of Russian troops in Ukraine and MP Mikhail Zabelin’s comments on that for your website, it is not my place to give an assessment to my colleagues’ words. I have known Mikhail for more than half a century, and I know him as a level-headed, prudent politician. It is very likely that official Russian organizations (Rossotrudnichestvo and the Russian embassy) had a hand in this.  Otherwise, neither he nor the community would have been in such a hurry to voice their opinions on the issue so ambiguously perceived both in Azerbaijan and in Russia itself. Let me remind you that only Syria, Eritrea, North Korea and Belarus supported Russia, while the overwhelming majority of states condemned it at the special session of the UN General Assembly.